In 1931, a Czechoslovakian businessman and entrepreneur called Thomas Bata Sr bought 600 acres of undeveloped farm land, just outside the quiet town of East Tilsbury on the northern banks of the Thames Estuary. Far from Zlin, in the now Czech Republic, where his family-owned shoe company headquarters was the first automated factory in Europe (and where he’d had his office built into an elevator for his own convenience, the genius!), he planned to relocate the majority of his business to South East England, seemingly reluctance to pay high tariffs on exports and the rise of communism factored in to the decision. Bata was an innovator, an influencer, and having been inspired by a trip to the Ford Plant in USA and learning about conveyor belt production, he single-handedly revolutionised the shoe manufacturing industry. He understood recycling and reusing long before it was “cool” and sourced free used tyres to melt down to make soles. Although Thomas Bata died in a plane crash just a month after the land transaction was completed, he left behind for his only son Tomas Jr. a detailed description of his vision for “Bataville”. 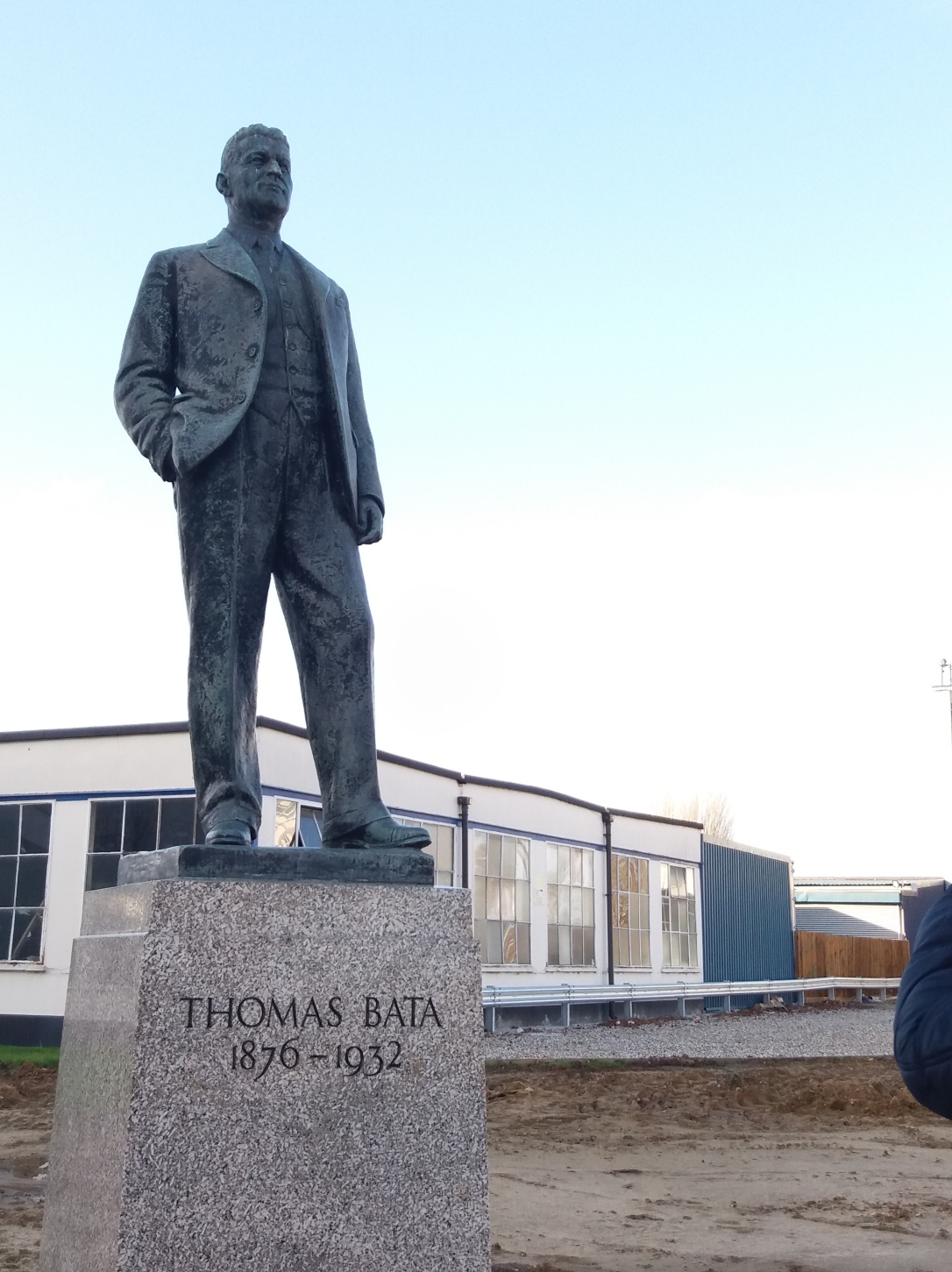 His statue stands in front of a sprawling industrial estate today, with his back to the river, his face turned to the street, one hand casually in his pocket, the area around him badly littered and wrapped haphazardly in security wire fencing. Just opposite, a big green park, complete with a war memorial and children’s playground. A cute village hall with winding rows of strange little houses behind. These houses are squat and boxy and have a modernist feel, with flat roofs and either too many or too few windows each, I’m not too sure. Either way very out of place here in the English countryside. Built in 1932 alongside the large factory complex across the road, these houses form part of a designed community for the 3,000+ (4,000 at it’s peak) Bata employees and their young families, with open spaces and shared amenities, a planned landscape microtown.

Bataville is not the only town the Bata Company had designed and built, the architects commissioned definitely stamped their Czech modernist influences on the fields of Essex, and although in the end the place only grew to one quarter of its planned size, the facilities for the “Bataman” employee were incredible for their time. There was apparently a great atmosphere in the complex, good schools, they enjoyed a gym and tennis courts, a cinema complex, a swimming pool, and the football pitch was so good that West Ham would make the trip down to play Bataville regularly (a fixture Bataville FC are rumoured to have won once) In a time of mostly outdoor plumbing, residents here had their own bathrooms, they had medical facilities and there were shops with fresh local food, an espresso bar, The Bata Record weekly newspaper and in the 1960s Tom Jones played here in the village hall!

While the Bata Company continued to churn out stylish, affordable shoes for the rest of the world (and ran an in-house university-style program to teach the skills of the shoe making industry to locals) Bata Jr ensured the success of his brand by continued automation and clever utilisation of any plant by products. The company was producing every aspect of the entire shoe, from laces to eyelets to leather uppers to the cardboard shoe box itself, all from its self sufficient factory complex.

Apparently the company piped music into the factory complex grounds during working hours, there were constant competitions encouraged between the staff both on and off the clock with the results being published weekly in the newspaper, and a Bataman would likely be told off by his manager should he not keep his garden tidy or his house up to scratch. Doesn’t sound like such a good work life/balance to me, a little too “comrade-y”, and the idea of paying the company you work for back in rent and groceries from the shops they own (and conveniently surround you with) is horrifying, but Thomas Bata Sr believed that happier employees are more productive, and he provided all he thought his staff needed to live happily in Bataville.

Cool back story, no? Of course when we stumbled across this story we had to visit the Bata Factory. We skirted around the sleepy security guard and walked the derelict grounds of the former busy factory and saw the once-lovely industrial Bata buildings in varying states of disrepair. 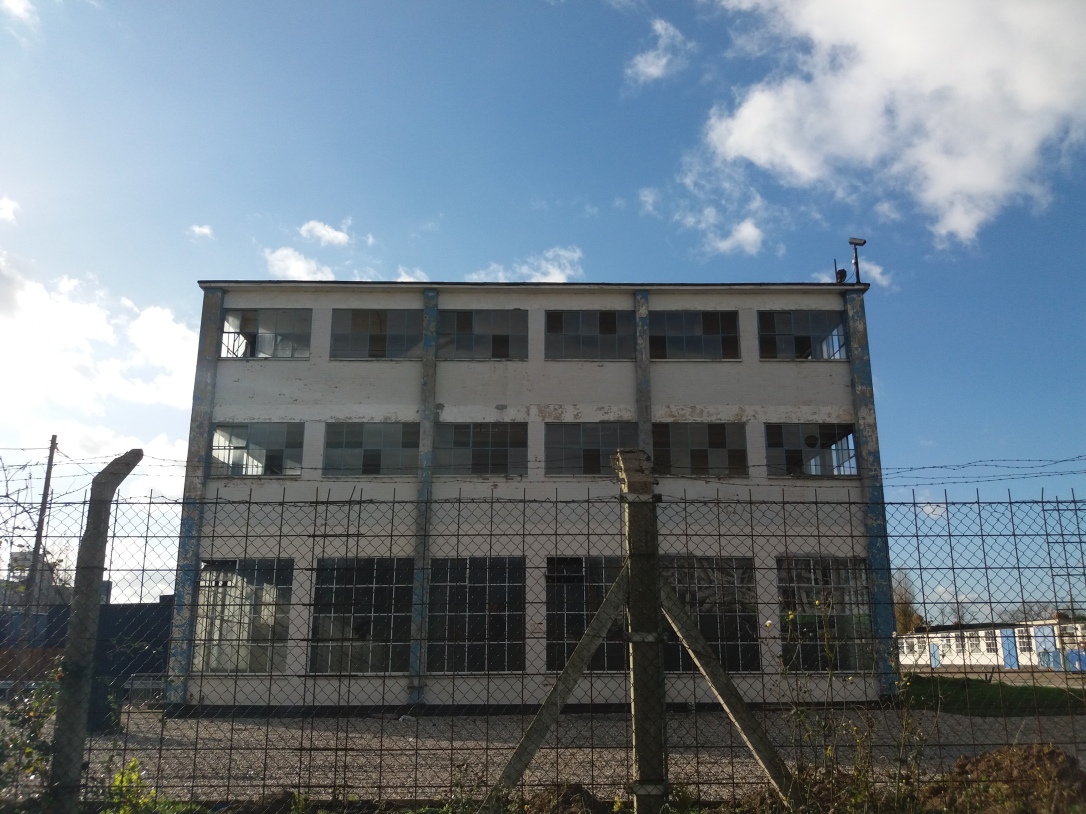 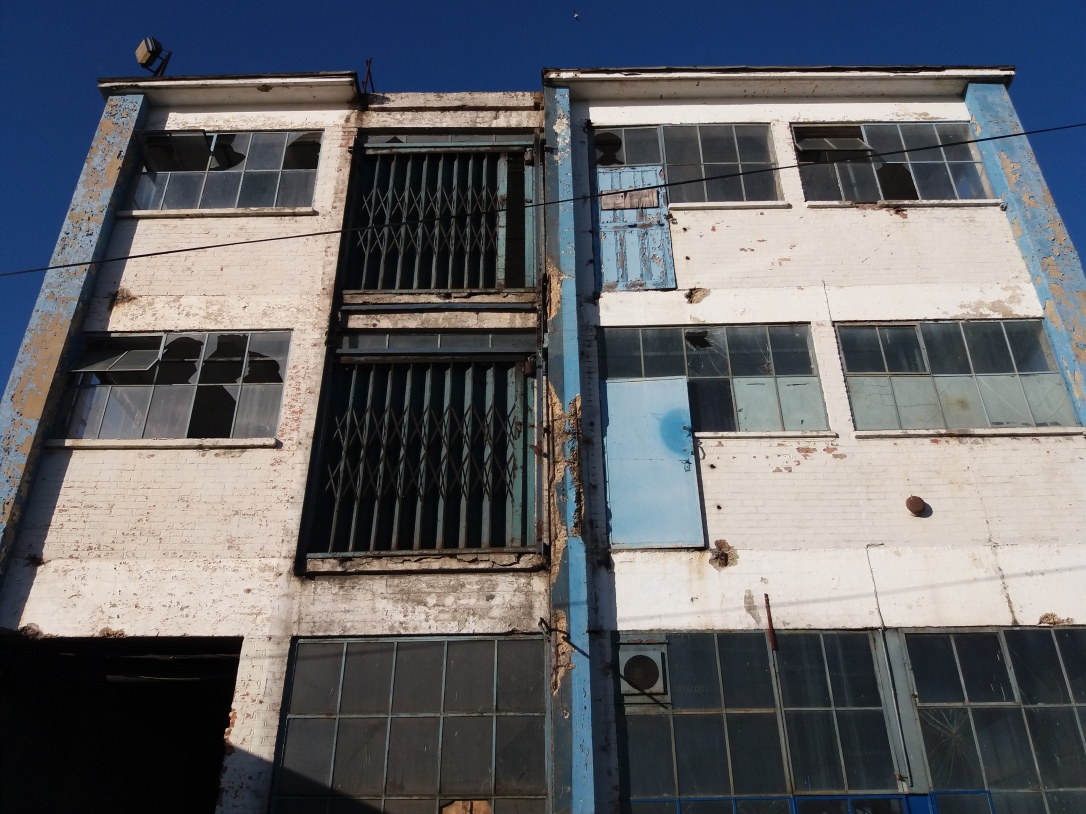 The yard outside the main building is full of small, long, numbered sheds, each one a seperate part of the production. Some sheds still have downed tools and large abandoned machines gathering dust inside. Creepy. 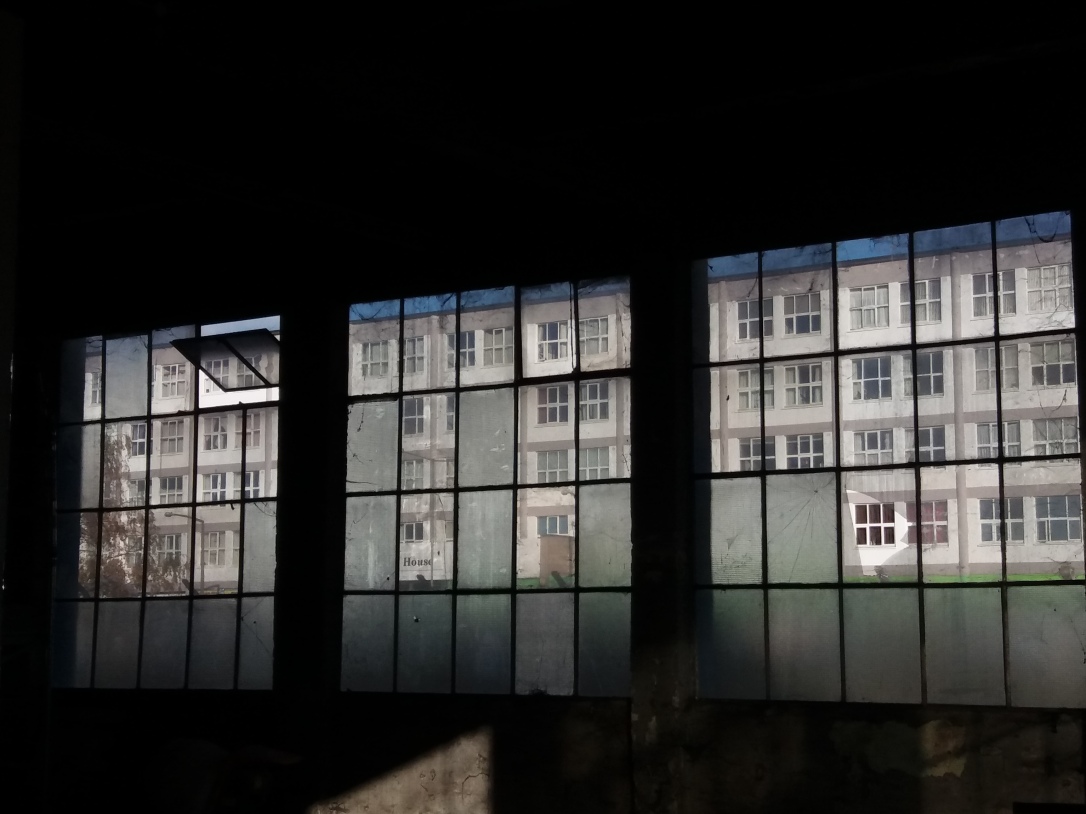 Back in the heyday of Bata, an apprenticeship from such a renouned company could take you anywhere in the world. During the war, the company dutifully sent ration packs to its deployed employees. Bata was at one stage the world’s leading shoe manufacturer. Bata Sr introduced the 5 day work week to Europe, and he was responsible for the “9” at the end of the sales price, a common psychological ploy to trick the buyer, a strategy still called a Bata Number today.

The main Bata building with the boxed roof logo still intact has seen plenty of better days too. 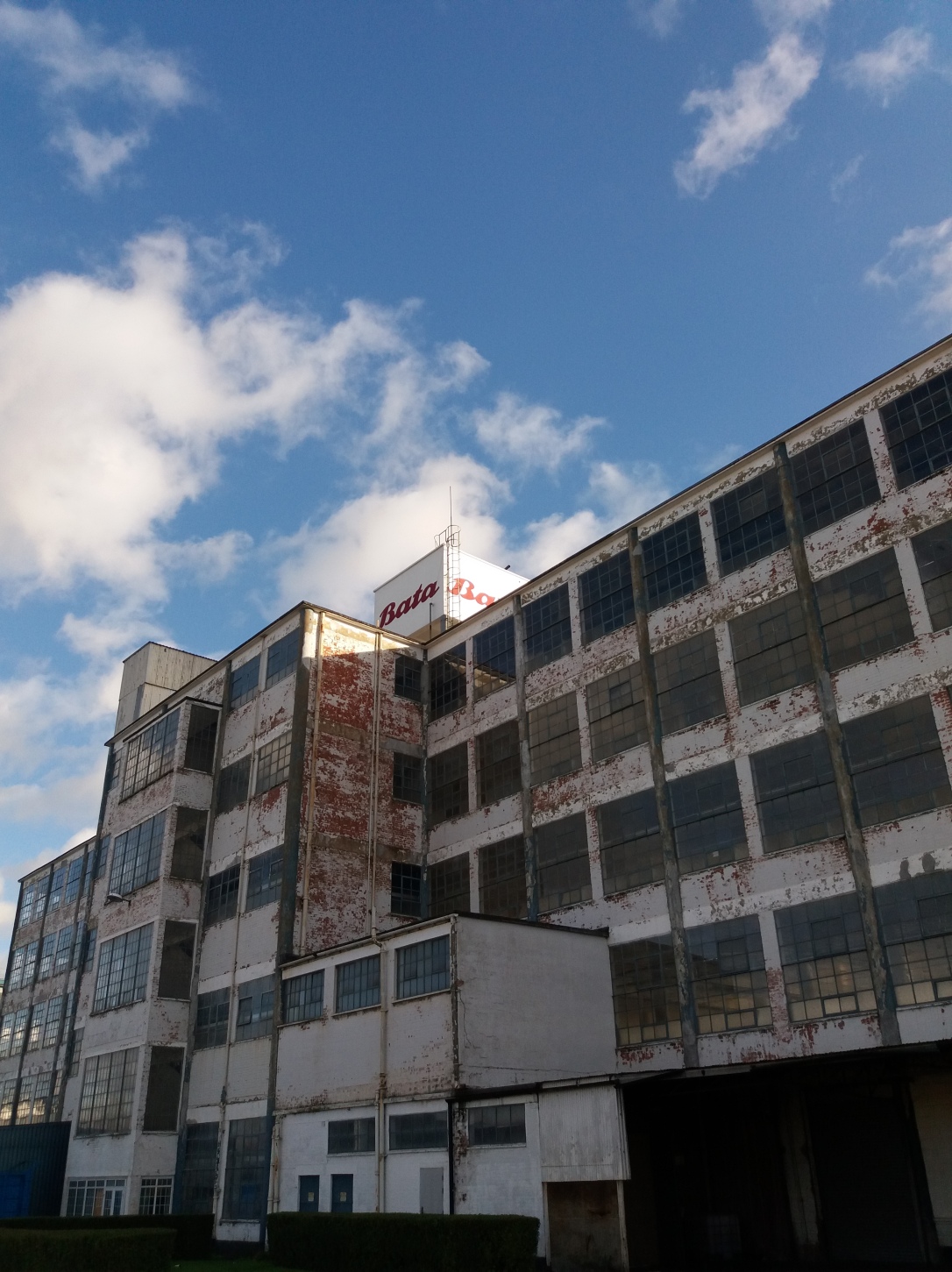 So what happened to Bataville? I wish there was a less predictable ending to this story but I’m afraid there is not. Bata Jr and the shoe manufacturing industry automated so damn well they automated the humans right out of their jobs. Production moved to Malaysia, head quarters to Canada. The little houses across the street in the complex were sold privately one by one and the factory was downsized until it’s complete and inevitable closure in 2005. Bata Jr died in 2008 aged 93. That’s life, thats growth and decay, the shoe must go on. Sorry, but thats the best I could come up with. 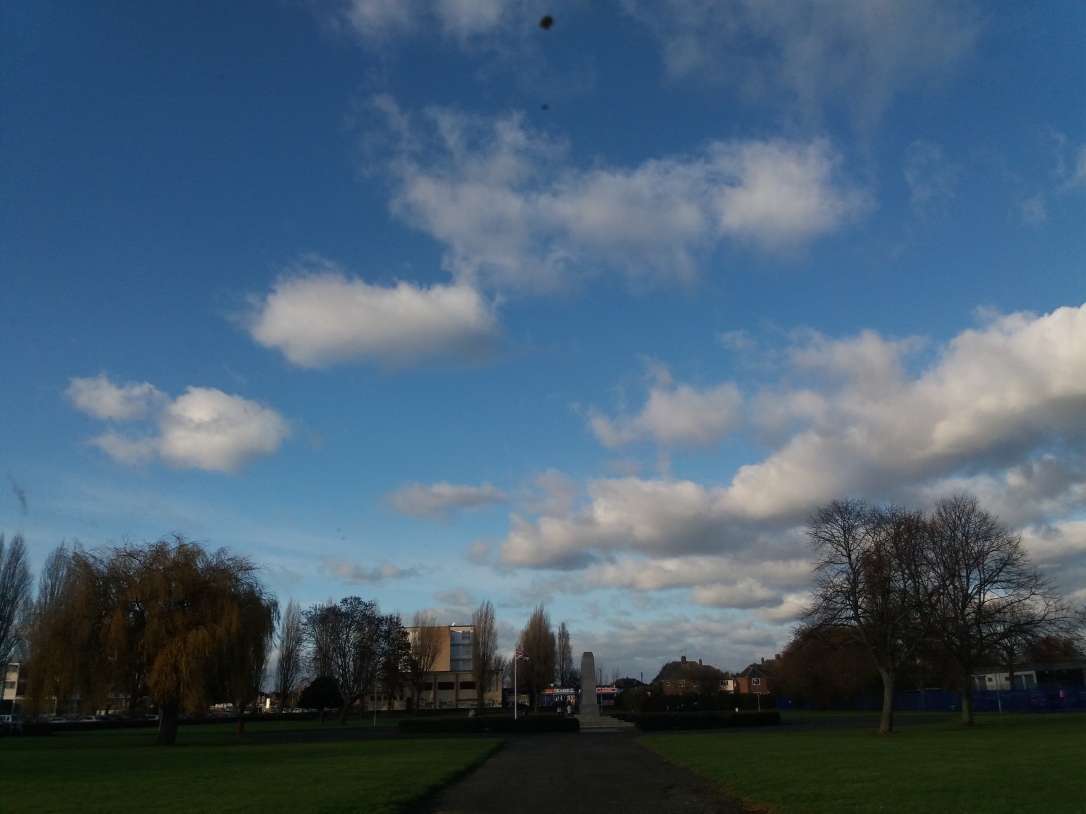 We bought some supplies to last the next few days in the former Bataville Hotel, now the local Co-op. On the way back to Dixie I found a penny on the ground, I’m averaging about 2 a month. I think that might be just the perfect amount of luck for me. We cooked and ate burgers for dinner in the back of Dixie, overlooking the scene in the above photograph and talking about other planned towns and communities of note, Bourneville is one we agree we would both like to visit, it’s got no pubs as the founders were Quaker. Ours was a Saturday afternoon visit to Bataville, and parents and kids on bikes and dogs were out enjoying the few hours of sunshine available on a chilly November day. Though once the most modern town in England, Bataville now is just like anywhere else really, a funny little place with a funny little story.

Before we left Bataville we watched the sun set behind the old factory, the pink light reflecting off the broken panes of glass and breaking up into a million pieces in the sky. 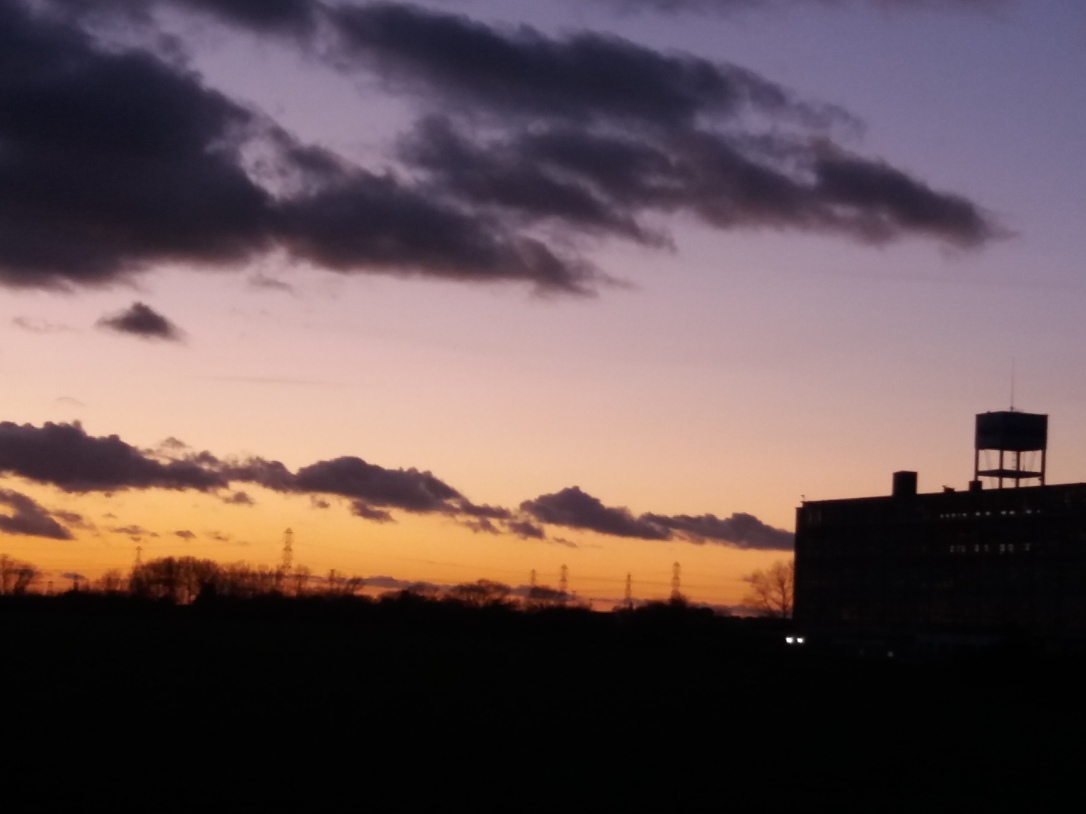