Anyone remember the year 1999? Mambo Number 5 had hijacked the airwaves, the internet was still a relatively new and exciting invention and the whole world was gripped in Y2K panic, fearing the end of life as we know it was nigh because computer programs might not understand or be capable of interpreting the number 2000 as a date. Airplanes would drop out of the sky we were told, and all digital banking and financial records would be destroyed as clocks and computers would struggle to continue computing and implode…. Or maybe not.

I remember the latter half of 1999 well as I had just given birth to my first and only child, so as you can imagine widespread millenium scaremongering was about the last thing on my scattered post-partum mind. Like most new parents I saved any and every little thing of interest during her first few years of life in a big box which moved with us from Ireland to Bermuda and found its way back years later when she did too. That bundle included a certificate we received (and promptly forgotten about) from the Irish Governments National Millenium Committee. To mark the occasion of the year 2000 a native Irish tree was planted on behalf of each and every household in the country. 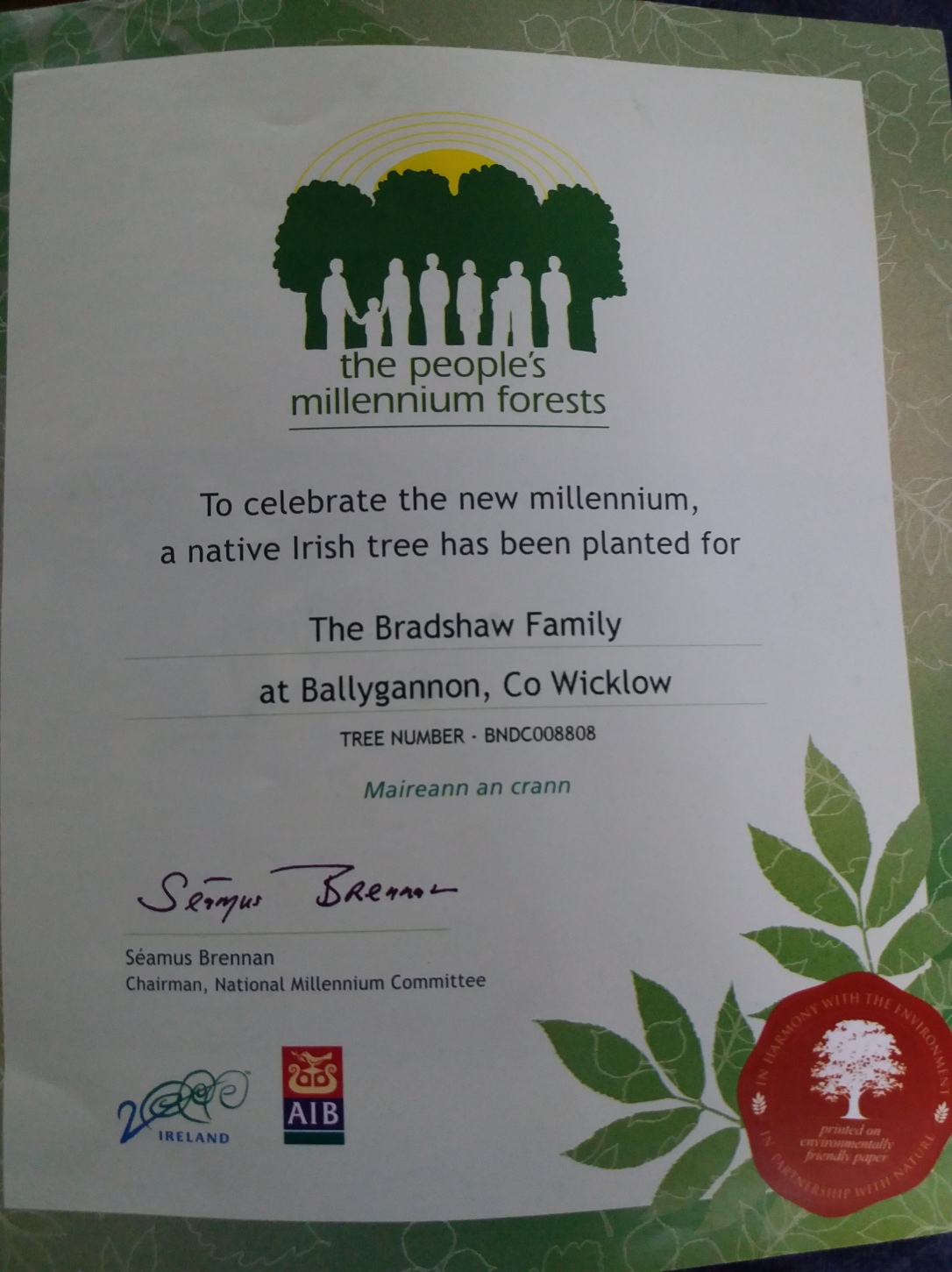 The Bradshaw Family tree, imagine that! That tree must be 18 by now, just like my daughter, though probably a lot taller, a yew tree for example can grow over a foot in a year and she stopped stubbornly at 5ft 2″ 😉 We decided it was about time to take a trip to the forest in the hopes of identifying the Bradshaw Family Tree for ourselves. The certificate came with a tree number and the booklet attached encouraged us to visit once the trees had matured beyond saplings but 18 years is a long time in a forest, especially one being left unmanaged, we wondered what exactly we would find. Oak, ash, birch, alder and Scots pine, all native to Ireland have been planted as part of the scheme, which species would our tree be? How would we even find which was ours? Would the forest be there at all?

Ballygannon Wood is about 10 minutes north of Rathdrum in County Wicklow and we found the forest easily enough thanks to some highly visible signage emblazoned with the People’s Millenium logo on the roundabout in the village. Unfortunately, like a lot of Wicklow carparks the looped driveway in and out of the wood had a height restriction barrier and Dixie is just a couple of inches too tall and completely unwilling to limbo. We left her by the road instead and filled a backpack with coffee, cups, fruit, water and snacks. It was an odd afternoon weather-wise, warm but the sky was a glaring kind of grey and very close to the ground all day, clouds threatening to burst into a sudden rainfall that actually never came. Coilte, the organisation responsible for the 13 plots of Peoples Millenium Forest scattered around Ireland are using these plantations in different ways we read, for conservation techniques and education purposes and some plots are left to revert back to the native forests that Ireland was once covered with.

The smell of thick forest is unlike anything else in the world, a peculiar earthy kind of dampness. It had been raining just before we arrived, there was evidence everywhere in big puddles on the higher forest floor and we walked with a carpet of wet mushy leaves underfoot. The river Avonmore rushes right through Ballygannon Woods, in its hurry to meet the Avonbeg and become the mighty Avoca, we heard the running waters but could not quite see it through the brush. A lazily winding path took us downhill through the trees, dense and tangled in patches while sparse in others. Nearer the river young silver birch wearing the most incredibly vivid shades of green moss sprouted up from completely waterlogged soil, thankfully a suspended wooden walkway saved us from that slog and we wandered slowly on the algaed planks through the quiet afternoon without meeting another soul.

I read once that Y2K  type ‘scares’ are good for the economy, that having civilians stockpile certain necessities and governments publishing lists of what to buy for what particular coming emergency is a way of stimulating the economy similar to an impending major weather event. Some smart people set up businesses qualified to assess other businesses Y2K “readiness” and “compliance” for a set fee and did quite well for themselves for a time. Personally I have to wonder have those pre-2000 preppers have used all that toilet roll yet, it always seems to be toilet roll people stockpile, hundreds and hundreds of rolls….

Now, the Irish government isn’t exactly famous for its generosity, this was the year 1999 remember, 3 full years before we all received in the post 2 free iodine tablets each in case of a terrorist attack on Sellafield. The troublesome nuclear power plant just a few miles away across the Irish Sea on the Cumbrian coast could be attacked they said, and the iodine tablets could counteract any radioactive iodine you see, and the whole country became overnight experts in the subject of irradiation. The enormity of such a prediction of terror coupled with the hilarity of such a short-sighted response from the Men In Charge, all at a cost to the taxpayer of over a half a million euro, it reminds me of Y2K, more scaremongering, more rather convenient state-sponsored confusion, inventing a problem where none exists.

1.3 million millenium trees were planted by 2001, that is a lot of greenery and a lot of natural habitat for all kinds of animals including squirrels, stoats, hedgehogs and shrew. We listened to the birds whistling high up in the trees, unchallenged by any human or traffic noise, the dull roar of the river nearby the only other sound in this very peaceful place. Ballygannon is home to about 40,000 of those 1.3 million trees and it didn’t take long for us to realise that we would never in a million years track down the specific tree, Tree Number BNDC008808, the Bradshaw Family Tree.

The government took some flack for the People’s Millenium Project at the time and it was mostly written off as a grand dream, experts in the field of planting (pun intended) rightly pointed out the necessary process of thinning the saplings would reduce the number of surviving trees significantly and the idea that individual ones could be atrributed a number and then allowed to grow wild and somehow still be traceable is really rather ludicrous. Questions regarding the issuance of grant money and whether the scheme was tendered properly mired the project in further bad PR. We saw lots of plots around the forest that seemed recently razed, were they once millenium trees? What do the 12 other forests look like now?

The young wood was awash with bright and varied shades of green, rich and unreal at times like a landscape artists pallete spilled onto the forest floor and we walked and walked, still all alone, along the primrosed path. By early evening a cold began to creep in and a low mist gathered between the trees, we stopped at a bench for a warm cup of tea and thought about the day. Each household in the country also received a large white candle to commemorate the turning of the Millenium, I’m afraid to even ask how much tax payers wax was involved in that stunt but the gesture certainly fits the doomsday narrative, candles being a must-have for every predicted disaster and every coming apocolpyse, whether computer generated, zombie related or otherwise.

Does it matter that we didn’t exactly find Tree number BDNC008808? Not really. On the way back to Dixie we spotted some skittish young deer, 4 of them, at first standing so still in silence half camoflaged between the trees, we held our breaths but something nearby startled them and all four took off together in a sudden collective leap and with a flash of their bushy white rears and tails they were gone… It doesn’t matter at all about the tree. What matters is that the native forest is here, planted and cultivated as promised and accessible to people like us and generations to come to use, protect and enjoy. We read about a man who claims to have located his exact tree, easy he said as he had been visiting since the thing was first planted and it happened to be right on the edge of one of the paths and readily identifiable. Perhaps if I hadn’t left it 18 long years to make contact things would be different but I have no room for such botanical baggage and I know it certainly won’t be another 18 years before we return to visit the forest again. After our walk I’ve come to the conclusion that every single tree in Ballygannon Wood is tree number BDNC00808, each one is the Bradshaw Family Tree.

By the way, those iodine tablets that you kept “just in case”? The whole batch expired in 2005. You can throw them away now, the government says there is no threat, not anymore 😉

5 thoughts on “In Search of the Family Tree”